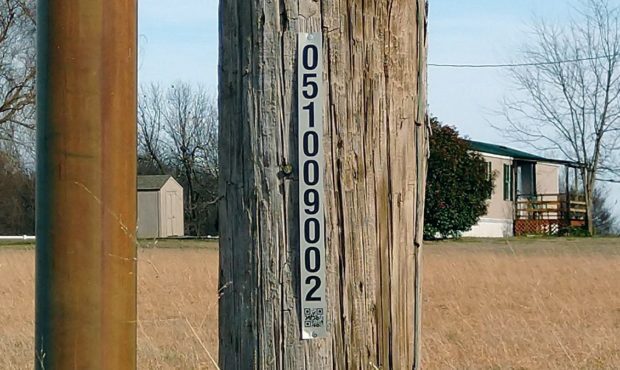 For more than eight decades, a major electric cooperative has helped to improve the economy and quality of life for the rural Oklahomans it serves by delivering electricity to under served areas. Recently, the co-op added high-speed fiber-based broadband to help close the digital divide that rural communities face. This enhancement resulted in a need to mark 160,000 utility poles.

Utility poles make up a significant portion of the co-op’s operating costs. Each utility pole costs approximately $400, with its value increasing as complicated assets, such as fiber optic components, are added.

Over the years, the co-op has used different methods to keep track of its utility poles, including numbered poles and GIS coordinates. But these methods weren’t keeping up with the organization’s capital improvements, which is now in the second phase of a six-phase, 5,000-mile fiber build out.

According to the cooperative’s GIS coordinator, the co-op was struggling with a way to accurately identify all the poles in their network, especially ones that required maintenance or needed to be replaced.

“We tried using old-style mailbox lettering, which required manually sliding numbers or letters inside brackets,” he said. “This numbering system led to some inadequacies – we were running out of certain numbers and letters in the warehouse, numbers were falling out of the brackets, and we were seeing duplicated numbers due to manual error.”

“We found we would save thousands of dollars using Camcode’s pole tags.”

The incomplete or duplicated tags significantly affected the data the GIS coordinator received with each individual pole’s longitude and latitude, making inspection, maintenance and/or replacement by the contracted inspection companies and co-op employees problematic.

In late 2018, the electric cooperative decided to implement an asset management tagging system with the ability to link each utility pole in its database to a QR code on the Camcode pole tag.

“We received a quote from Camcode for its Metalphoto® Bar Code Pole Tag,” the GIS coordinator said. “We found we would save thousands of dollars using Camcode’s pole tags. Plus, we planned for the future by adding a QR code at no extra cost. Ultimately, we’ll be able to use the QR codes on each tag to streamline pole identification and tracking.”

According to the GIS coordinator, the electric cooperative has already seen numerous benefits since it began installing Camcode asset tags, including:

“The Metalphoto Bar Code Pole Tag has been instrumental to upgrading and modernizing our rural electric infrastructure,” the GIS coordinator said.

Camcode offers barcode pole tag solutions that can withstand abrasion, high temperatures, and exposure to UV, chemicals, and solvents, along with multiple attachment options to suit your application

Camcode can recommend the right label or mark type for any asset identification needs. Our recommendations are based on decades of durable label expertise.

Camcode’s barcode pole tags remain readable throughout the lifespan of your assets, so you’ll never need to re-label.