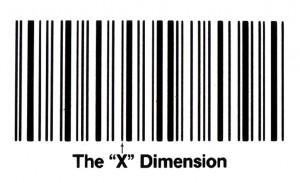 Symbologies are what makes the bar code portion of an asset tag useful. Symbologies are systems of encoded data in a bar code that scanners or bar code readers can decode and process the stored data.
The first step toward understanding symbologies is to review some key terms.

The most common symbologies include the following:
Code 39 – This is a discrete code and one of the most commonly used industrial symbologies. It uses Alphanumeric characters such as 0-9, A-Z. However, the alphabetic characters must be upper case only. Code 39 can also include seven special characters: $ % / . – + space. It has a variable length and variable ratio of 2:1 to 3:1, with 10X quiet zones required. The bar code features the pattern thin, thin, thick, thick, thin. It is typically used on asset labels for industries such as military, healthcare and automotive.
Code 128 – This is a continuous code. Alphanumeric characters are used with variable length and four different element widths that do not require ratios. Common on asset tags, it features 128 encodable characters and three subsets.

Interleaved 2 of 5 (I 2 of 5) – This is also a continuous code, however it is numeric only. Each character encodes two digits and messages must have an even number of characters (or add leading zero). This symbology is the least common and is susceptible to short reads.
Two Dimensional (2D) – This can be a typical 2D code or a matrix like a Quick Response (QR) Code. This symbology encodes information both horizontally and vertically, allowing a large amount of data to be encoded in a small space. Specifically, it can encode up to 3116 numeric digits and 2335 alphanumeric characters. The symbol is built on a square grid arranged with a finder pattern around the perimeter of the bar code symbol. It is most often used with MIL-STD-130 UID labels.
If you need assistance determining which symbology is right for you, or help formatting your data for encoding, Camcode can help!