With small arms and light weapons quickly becoming prevalent in conflicts such as civil wars, terrorism, organized crime and gang warfare, the issue of controlling the illicit trade of these weapons affects the global population with both political and human rights implications.  In the effort to combat and manage the illicit trade of these weapons, the ability to track and trace small arms and light weapons is also becoming increasingly more important.
But the issue of combating the illicit trade of small arms isn’t new. In 2001, the UN Programme of Action (PoA) put the foundation in place to counter the illicit trade and uncontrolled circulation of small arms and light weapons at the national, regional and global levels. However, more than 10 years after the PoA’s foundation was laid, action has yet to begin. On June 16, 2014, numerous of delegates from around the world will convene at the United Nations Office for Disarmament in New York City for The Fifth Biennial Meeting of States (BMS 5). The purpose of this meeting is to consider implementation of the PoA.
In 2005, the International Tracing Instrument (ITI) was adopted by the UN General Assembly under the basis that weapons could be traced back to their last legal owner through identification marks and corresponding records.

On April 2, 2013, the UN voted overwhelmingly to adopt The Arms Trade Treaty (ATT), which builds on both the PoA and ITI. It is the first international Treaty aimed at regulating international trade of conventional arms and utilizing accountability and reporting as a method of control. ATT takes the PoA one step further in that it not only aims to regulate trade of small arms and light weapons, but it also covers items such as tanks, helicopters, combat aircraft, large-caliber artillery systems, warships, missiles and missile launchers, and more.
According to the Summary Analysis of the Arms Trade Treaty, the ATT will require that “States Parties submit annual reports on international transfers and national implementation activities. The Treaty text also provides for reports to be made publicly available, thereby improving transparency in the global arms trade.” 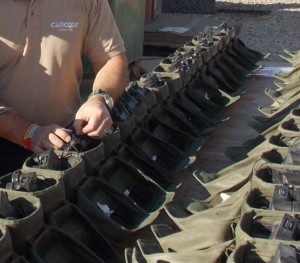 Camcode believes in improving transparency in arms trade by means of weapons tracking. Through Camcode’s experience working with the United Kingdom Ministry of Defence (UK MoD), we have developed proven methods and processes to track arms and generate accurate reports for weapons tracking. With the knowledge we have gained through this work, Camcode fully supports the development of arms tracking initiatives, including PoA, ITI and ATT.
During combat missions in Afghanistan, the UK MoD’s main focus was providing warfighters with weapons and equipment as quickly as possible. Now that the war in Afghanistan is ending and the drawdown begins, the UK MoD’s focus has shifted to more efficient logistics and equipment management.
To improve efficiencies in military asset management and visibility, the UK MoD developed a Unique Identification (UID) policy to uniquely mark and identify specific ranges of equipment within the defence inventory.
Under the UID policy, two-dimensional (2D) UID bar code labels and marks must be affixed on specific military assets. The data in the bar codes contains information such as the asset’s serial number, part number and a unique item identifier (UII). Each item’s unique information is then scanned and stored in an item registry database. The information collected in the database creates a number of significant benefits and efficiencies for the UK MoD, including automated receipting, issuing and stocktaking of marked items, and the ability to access an item’s status, history and configuration. This information could also be used to generate reports on international transfers and national implementation activities, as identified in the ATT. 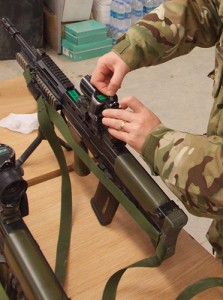 As the UK MoD’s UID Enabling Contract holder, Camcode was charged with helping the UK MoD implement a strategy to identify, track and manage its military assets returning from Afghanistan.
In order to better manage military assets and ensure Proof of Good Order (POGO) during equipment returns from Afghanistan, the UK MoD established a goal to mark 300,000 items in a two-year Contractors on Deployed Operations (CONDO) contract prior to drawdown.
There were numerous difficulties associated with marking military assets in Afghanistan. Primarily, standard label production and shipments could not meet lead times or accommodate the fast moving nature of assets in Afghanistan. Poor communication lines and time differences also made label production and installation nearly impossible.
Camcode determined that data management, label production and label installation would have to be performed in-theatre in Afghanistan by a self-sufficient team. Working with the UK MoD, Camcode established a UID marking facility in Camp Bastion, Afghanistan where UID labels were produced and installed for all combat locations in Afghanistan, including remote locations in Afghan villages. Five Camcode employees, consisting of former military veterans, were stationed at Camp Bastion to complete the UID project.
This type of marking program in an active conflict area had never been done before. As a result, Camcode had to develop a custom training environment. In addition to mobile marking cart production processes and installation procedures, employees were also trained on UID label substrates and adhesives, and how to detect and correct any issues that may arise. It was during this training that Camcode developed error-proofing and data reconciliation processes to perform quality control by distance.
Once in the field, trained employees relied on the systems and practices developed during the pre-deployment training. Even when lines of communication were unavailable, the Camcode Afghanistan Team executed a robust data management system that ensured the marking schedule was continually met, while also allowing the UK MoD to maintain their combat effectiveness throughout the marking process. 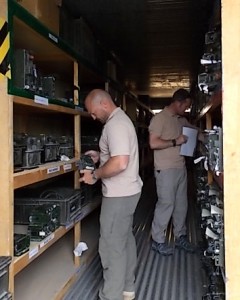 Through the development of data management and reconciliation processes, Camcode was able to improve the UK MoD’s data accuracy from approximately 30% to 90% accurate. This improved the rate and numbers of assets marked, limiting the interruptions of normal military operations.
In addition, improvements in data management and asset identification led to the location of c£3.5m (approximately $5.8 million) of dismounted close combat equipment that the UK MoD believed to be scrapped, lost or written off, all within the first month of the Afghanistan project. The success of Camcode’s data management and reconciliation processes in Afghanistan have also significantly aided in the UK MoD’s redeployment process and the UK Government’s POGO initiative.
Through training procedures, quality systems, reporting tools, production and installation systems, the Camcode Afghanistan Team created a successful UID program in-theatre in Afghanistan. With military assistance, this experienced and effective Camcode Afghanistan Team now regularly advances to Forward Operating Bases (FOBs) in the most remote military bases and installs UID labels successfully.
Camcode members have been invited by the United Kingdom representative for the United Nations to attend The Fifth Biennial Meeting of States on June 16, 2014. Camcode plans to share its successful experiences in arms tracking with other nations and members of the UN, as well as commercial and industrial partners, as part of our commitment to the arms tracking initiative. We will continue to report on the developments within the worldwide arms tracking program and highlight Camcode’s involvement in this important global issue.